Exactly How To Tell If Someone Is Flirting With You: 21 Top Signs

How do you know if a guy is flirting with you? Use these 21 signs!

When flirting goes well, it’s a downright euphoric feeling. It’s like a smooth game of tennis where both parties know exactly how to play in sync with each other. A lingering eye contact here, a gentle tease there. Flirting is just fun!

Before you can slip into that sweet spot, however, you might want some proof that your crush is crushing back. It’s hard to project a cool confidence when you’re desperately wondering what the other person thinks about you … and if they truly are flirting and not just being friendly.

MORE: Is He Flirting With Me? How to Know For Sure

To help you navigate those waters and turn on your most charming self, we’ve compiled a list of 21 signs that he’s flirting with you. 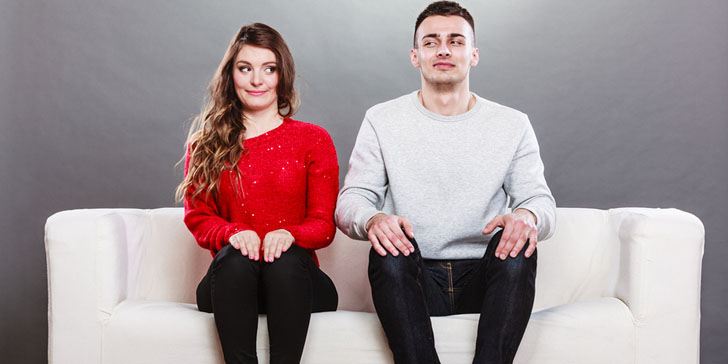 This one is a classic for a reason. Regardless of your personality, body language is a universal language and it doesn’t lie. Does he angle his body in your direction, making eye contact and smiling? You want to see that instead of crossed arms or a closed-off stance. Read this for more: Body Language Signs That He’s Into You

2. He acts differently around you.

When you’re in a social setting, study how he acts around you compared to others – especially other women. If he’s on the shy side, he might be quieter when you’re standing there. A bolder guy will dial up his charisma in the hopes of catching your attention. When a guy likes a girl, he will act differently with her.

3. He laughs at your jokes.

When you like someone, every joke they make is the funniest thing you’ve ever heard. Even when you’re not at your comedic best, a guy who’s into you will always laugh at your jokes.

MORE: How Men Flirt – Subtle Ways He Shows His Interest

4. He always looks his best around you.

If you’re going to be at the same event, he’ll definitely put more effort into his appearance. He might wear his most stylish outfit or dab on his most alluring cologne. He won’t forget to style his hair and he won’t show up looking like he just rolled out of bed.

5. He’s nervous around you.

Even a normally extroverted guy is likely to clam up a little around the girl he likes. Inherently shy guys will be even more flustered. He’ll fidget and maybe look like he can’t remember what to do with his hands. He may even blush – adorable.

6. He finds excuses to touch you.

Not in a creepy way, of course. Crossing the typical personal space boundary and initiating little touches is a clear way to study your reaction to future intimacy. Be aware that he’ll be watching you for a response when he lets your hands brush as you walk or bumps your knee with his.

MORE: What Guys Do When They Like a Girl

7. He tries to figure out your relationship status. 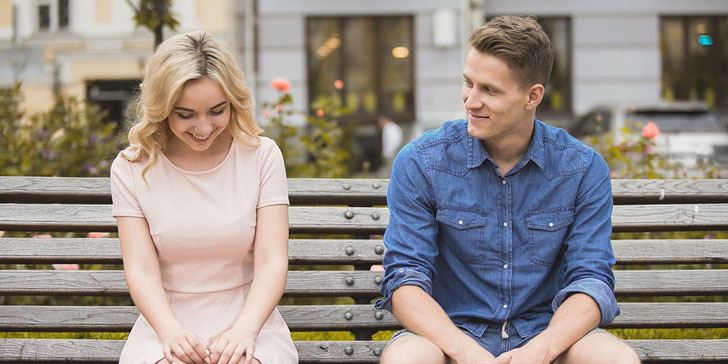 Obviously, the straightforward approach to figuring out your relationship status is to just ask you. Not all guys will be into that idea so he might ask mutual friends. He could also ask innocently leading questions such as, “What did you get up to this weekend?”

8. He compliments you.
It’s not always easy to compliment someone you don’t know very well. Some people are comfortable just putting it out there, but others will find subtler ways to convey their admiration. It could be something as simple as telling you that your shirt looks cool. If you respond positively, he’ll increase the intensity.

MORE: How to Tell if Someone Is Flirting With You

9. He’s active on your social media.

Social media is great for keeping tabs on someone. It’s also a popular way for people to reach out without completely putting themselves out there. When a guy likes you, he’ll for sure be creepin’ on your Instagram. As things progress, he’ll be the first one to “like” your latest selfie.

10. He remembers what you say. 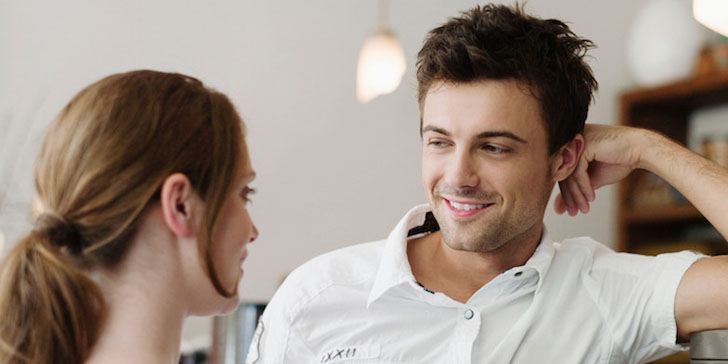 If you mention to him that you’re going to try your dog on a new kind of food, don’t be surprised when he inquires about that two weeks later. When someone’s important to you, remembering even the seemingly mundane things means everything.

Teasing is an excellent way to test the waters of a friendship. Playfulness is an integral part of intimacy. When you’re at ease joking around with someone, that shows a level of trust. It’s also a great way to slide in questions or comments “jokingly” and then gauge the reaction.

Boys on the playground often injure themselves trying to impress their crush. It’s an impulse that doesn’t really go away with age. A guy who likes you will do his best to appear impressive in your eyes. He might casually slide in an admirable accomplishment or nonchalantly demonstrate his knowledge in a particular area.

An excess of jealousy is unattractive, but a mild and healthy amount is endearing. When your first getting to know a guy, he might lightly mock other guys in your life. Even if it’s just the classic “what’s his name again” and follow-up mispronunciation, he’ll find a way to poke fun.

There are aspects of anyone’s life that are noteworthy. It’s when someone shows interest in even the day-to-day components of your life that you can tell something’s up. When a guy wants to know everything from your favorite TV show to your preference in dining, he’s asking for a reason. 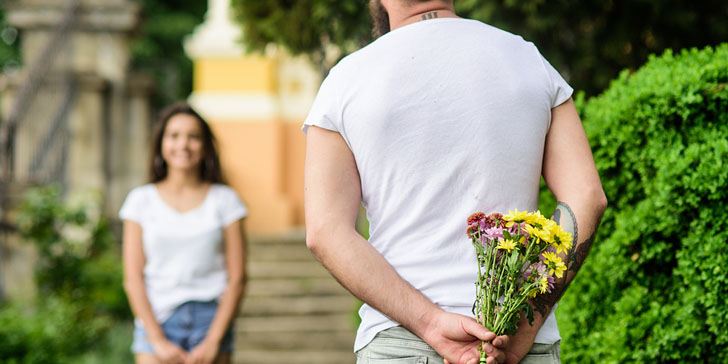 It’s a bit odd to give anything of significance to someone you don’t know very well. Despite that, motivated guys often find a way to gift the girl they like with something. It could be just a cup of coffee or a magazine you mentioned you liked. Even if he acts like it’s no big deal, know that he’s wondering how you’ll react.

MORE: How to Flirt With a Guy Without Risking Rejection or Embarrassment

If you say you can’t figure out how to hang your new antique clock, he’ll be the first one to offer assistance. (Even if it means he has to first Google how to do that.) No matter what the task is, he’ll be eager to lend a hand.

Texting alone is a sign of interest, but consistently being the first one to initiate a conversation is even more transparent. It means that you’re frequently on his mind and he wants you to know it.

18. He asks questions about your social life.

One of the first hurdles in getting to know someone is getting to know their social circle. If he’s curious about who you’re spending your time with, he’s probably doing his research. Whenever he gets the opportunity to meet them, he’ll do so with his best foot forward.

In order for a new relationship to grow, both people have to take their turn opening up. Someone has to be the first one to initiate it. If a guy really likes you, he might start this off by admitting a fear or insecurity. How you respond to this will be very meaningful, so take that responsibility thoughtfully.

MORE: How to Know If He Likes You For Sure 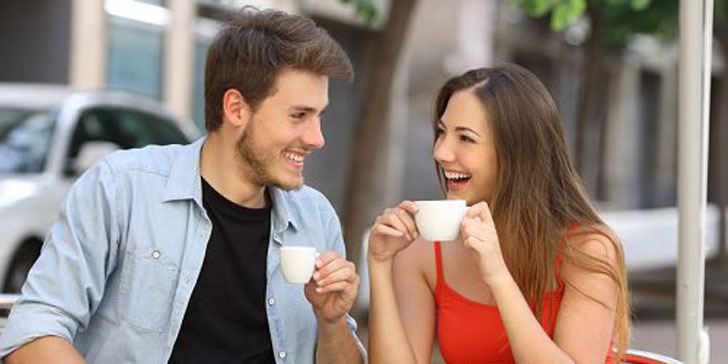 When asked what kind of traits they look for in an ideal man, most women include “sense of humor.” It just feels good to be around people who don’t take everything too seriously. When someone’s funny, you naturally want to spend more time with them. For this reason, guys will do their best to make the girl they like smile.

21. You feel the butterflies.

Chemistry is an unpredictable and intoxicating thing. If we could describe it perfectly, we wouldn’t always be chasing and delighting in it. When you have a flirtatious banter with someone, you feel that electric connection between the two of you. It’s a lovely sensation and it’s something you just can’t force. When you feel it, you just know.

MORE: How to Tell If a Guy Is Flirting

I hope this article helped clear things up. If he is flirting with you, that’s great! It means he probably likes you and wants to take it further than flirtation. If you want a relationship with him, then there is more you need to know. Do you know what really inspires a man to commit? Do you know what it takes for him to see you as girlfriend material, as a woman who is a cut above all the rest? If not, you need to read this next: The #1 Things Men Desire in a Woman

21 Signs He’s Flirting with You: 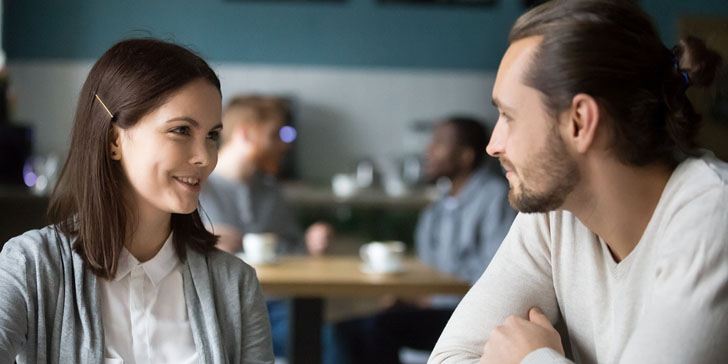