Let me introduce you to one of the most fashionable girls I know.

Her name is Michelle Joni, and not only does she love turning fashion New-Again (see her vintage storyboard above), she loves turning her life into a game. (Enter The NYC Game to learn more!)

Michelle has dedicated a little piece of her Game to A New Mode, with the New-Again Fashion Game.

In the most recent “round” of her game, Buffalo Exchange was featured as the BEST thrift shop in New York City (they have locations all over the country, too).

Read on to learn how to play and what you’ll win!

HOW TO PLAY:
Show or tell us your favorite vintage/thrift item by Tweeting it to the 3 New-Again officials: @michellejoni @anewmode @buffaloexchange, and including the game hashtag #NYCGAME

The contest will run from now through next Tuesday.

PRIZE:
4 winners will receive a $74 gift certificate to Buffalo Exchange (this is in honor of Buffalo Exchange’s 35th Anniversary; they’ve been around since 1974!). The hair feather and necklace in the picture of Michelle and I below are both from her Buff-Ex spree last week! 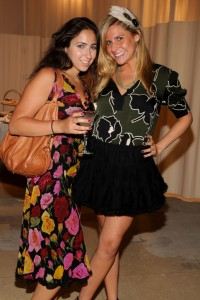 Winners will be chosen at random, but you must be following the NYC Game (@michellejoni) on Twitter.

Also, our favorite vintage pics may be featured in upcoming fashion stories!