At the age of 18, Emma Roberts is on the fast-track to super-stardom and is transitioning from cute child actress to grown up leading lady right before our eyes. She recently starred in the hit Hotel for Dogs and has been garnering lots of attention for her first indie role in the Sundance drama Lymelife. Emma’s beautiful face is also gaining quite a bit of attention- she’s the new face of Neutrogena and she’s the covergirl for the April Issue of Teen Vogue.

We got a sneak peak at the issue, on stands March 10th. Read on for exclusive excerpts from her interview and to get Emma’s cover-look!

On her new Film Lymlife (which describes as: American Beauty meets The Ice Storm): “Some people look at me and think, She’s just Julia Roberts’ niece. So I wanted to do something smaller and edgier, something that would show I really am an actress.”

On Boys: “I’m looking to musicians now,” she says, but the Jonas Brothers do not number among potential prospects, since they’re “a little tainted. I used to have a crush on Nick, but he’s kind of making his rounds in Hollywood, and I don’t know if I like that.”

On Her Favorite Designers: “I love Chloé, Graham & Spencer, and the Row, and I like those tight, Herve Leger-type styles.” 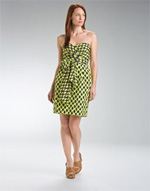 For inside scoop on Emma’s cover shoot, head over to teenvogue.com/emmaroberts